The New iOS 12: How it will Impact iPhone App Development

The new iOS 12 released on September 2018, and a host of new features have left the iOS developers both excited and anxious.

Anxious because, of course, all these new features are going to set new users preferences, which will ultimately affect business requirements, which will further impact the iPhone App Development process.

The release of Apple’s new operating system, iOS 12 is also crucial in the wake of Google’s Android Pie update and Google Pixel 3 launch, so the developers have a lot more learn and adjust to new technologies.

Moving ahead, Apple has also launched a round of hardware, including A12 bionic, a 64-bit ARM-based system on a chip, which claims to be 15% faster and 40% more energy-efficient than A11. Another notable hardware is bigger screen sizes. iOS developers now have to consider the UI of the apps as per the new screen size.

There are several other features of new iOS 12 that impact iPhone App Development, all for benefit though. The list includes the following:

As published in Apple’s website, with the new iOS 12 SDK, applications can take the benefits of advancements in ARKit, Core ML, Siri, and so forth. This year, the company has shifted its focus on from making the device look better to make the device and applications function better.

From the many great features, a few such as performance improvements, grouped notifications, and world-class for older devices, the crucial features that need developers’ support and will impact iPhone App Development are ARKit 2 and Siri Shortcuts.

Recognized for its multiuser and persistent AR capabilities, the feature enables app developers to use world-mapping data to bring users together with shared AR experiences.

Developers can create a multiuser AR experience by transmitting ARKit world-mapping data between nearby devices with the MultipeerConnectivity framework to create a shared basis for AR experiences. 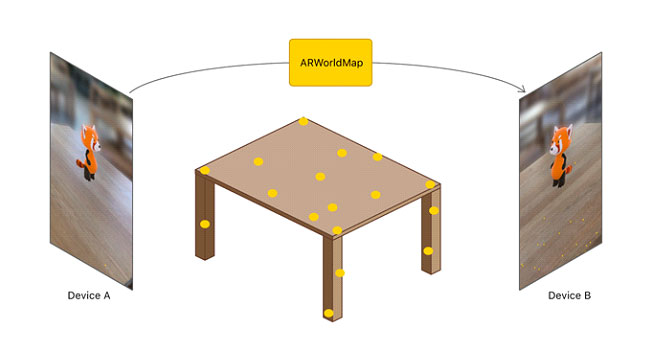 It enables iOS developers to make more and more objects a part of AR apps to engage users. Users can scan real-world objects and incorporate their position and movement into your app’s augmented reality.

Now that Siri can predict shortcuts and suggest those shortcuts to users, iPhone App Developers can create code to determine actions and specify those as relevant actions to Siri, so that users may use Siri shortcuts.

Now iPhone App Development companies can accelerate user interactions with Siri by adding shortcuts and phrases. Users can access the specific feature of the app from places such as Lock Screen, Spotlight search, and the Siri watch face.

Developers can build automated workflows, applying certain conditions, and when those conditions are met by the users, Siri can suggest the action at an appropriate time. 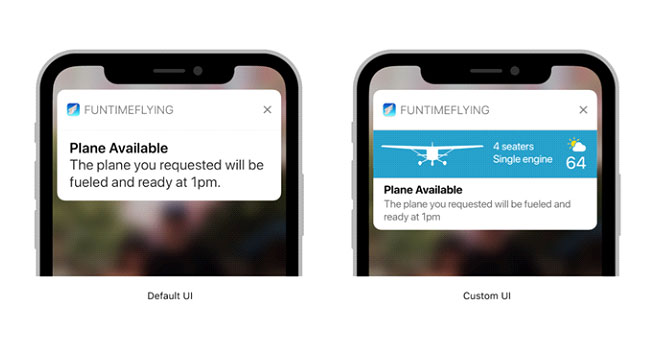 As you can see in the image, with Custom UI feature, iPhone developers can enhance the look and the feel of the content of the notification to make it more attractive to the users.

The custom notification interface displays content through the notification content app extension, which has a view controller.

The view controller helps the developer to:

With Network Framework, app developers can easily create network connections to send receive data, using transport and security protocols. Though this framework, iOS developers can directly access protocols such as TLS, TCP, and UDP for their custom application protocols.

This will mainly impact the graphic-intensive and gaming app development companies. New iOS 12 does not have OpenGL ES, a cross-platform graphics API, although, apps built on using OpenGL ES will continue to run in iOS 12.

Instead of OpenGL ES, the iPhone App Development companies can use Metal, which provides access to the modern GPUs on iOS, macOS, and tvOS devices. It enables applications to efficiently utilize the advanced rendering techniques by providing unified support to graphics and compute.

Capturing the Essence of iOS 12 in iPhone App Development

Apple is known to bring something exclusive to its users and iPhone app developers each year that make the company more attractive to its consumers. This time with the launch of new iOS 12 it has tried to boost the iPhone app development by providing a variety of tools to the developers so that they can develop customer-centric, appealing iPhone apps.

Startups and enterprises looking for iPhone application development companies must ensure that their technology partner has the iPhone app developers with effective strategies to utilize the advancements made by the Apple in iOS 12. Besides, with the introduction of new features, they also have the opportunity to modernize their existing iPhone apps.

Finoit Technologies is a renowned mobile app development company providing custom software development services and IOT application development services. We have developed over 450 mobile apps and have assisted enterprises and startups by functioning as a tech partner and rolling out their product ideas. We are a Standard Consulting Partner for AWS and have the expertise and experience to help transform the technology journey of our customers. For questions/queries, you may write to us at [email protected]