Would Mobile Games Continue to Dominate the Mobile App World?

Mobile games hold an unmistakable tendency to keep the fervent gamers glued to their smartphone or tablet’s screens. Beyond doubts, the comprise the most widely embraced entertainment category among all other video games and apps; a fact duly endorsed by reports from most reputed survey reports as well. Let’s find out what the main reasons behind their flourishing popularity are, and whether their popularity would continue to rise in the better future as well or not?

Let’s look at some facts and figures:

All these and many more facts unanimously indicate the grand success of mobile games across the globe ever since they broke the ice on the international fray with Tetris in 1994, followed by Nokia’s Snake in 1997. A bulk of reasons could be cited behind such prominence of mobile games, some of them may include:

Mobile games are here to stay for long since:

Threat to the industry of mobile games

Just as the surfacing of iOS and Android games overpowered the traditional gaming industry, chances may arise for the mobile gaming world to be overshadowed by the social networking as well. The report from Flurry elaborates this fact even further that shows a drop of consumer’s affinity towards mobile games by 4% from 25 minutes spent per day (Q1, 2011 ) to 24 minutes spent per day(Q1, 2012).

Interestingly, another category, social networking rose to the occasion, exhibiting 60% increase in the time spent by users, i.e., from 15 minutes per day (in Q1, 2011) to 24 minutes per day (Q2, 2012). The decrease in the users may depict the achievement of saturation level for mobile games but considering the fact that developers keep on introducing innovative concepts and infuse, the war between social networking apps and mobile games would be an interesting trend to follow in the coming times. 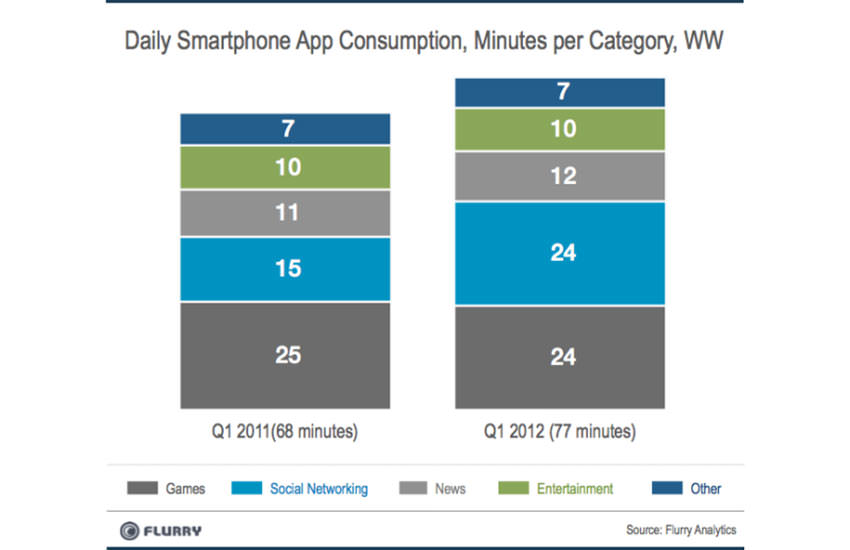 To summarize, mobile games, owing to the thrill and entertainment they assure to the gamers spanning all the ages have won millions of hearts. No wonder, with the continuous innovations in the gaming concepts, followed by the introduction of latest smartphones and tablets at a vibrant pace, their dominance dithers to wither in the better future, it seems.

However, with the increase in the number of mobile devices, consumers get the choice to test multiple apps other than mobile games as well, preferably social networking applications. Hence, it would be quite interesting to follow the silent war between mobile games and social networking apps in the coming times. May the best wins, but in either case, it is the consumer that has both of his hands full with plenty of excitement, entertainment and enjoyment.

Finoit develops quality mobile games that hold an unparalleled tendency to strike the senses of all and sundry, whether grownups or the kids. Throughout our mobile game development endeavors for android, iOS and Windows Phone platforms, we emphasize on coming up with alluring characters, enticing UX/UI design, and engaging and easy to understand gameplay.

Finoit provides affordable Mobile game development services for iOS, Android and Windows Phone platforms. Feel free to approach us for any your mobile gaming projects at the earnest.

Drop in your details and an analyst will be in touch with you at the earliest.