IoT app development is the hottest trend in the business and so both startups and enterprises are creating strategies to introduce engaging and hi-end IoT applications into their business.

Despite its apparent surge in demand, which is according to GlobalData, the market for Internet of Things is projected to reach $318bn by 2023, at a compound annual growth rate (CAGR) of 20%, many IoT app development companies face integration challenges while developing IoT applications.

To develop a fully-functional IoT application that can generate the desired outcome, businesses must turn up to an IoT application development company with the sound knowledge of technology components, platforms, security mechanisms, and APIs for their IoT app development requirements.

Even the slightest gap in integrations could lead to major failure. A Cisco survey reveals that “nearly three-fourths of IoT projects are failing”.

This write-up highlights viable elements that are essential for the development of IoT mobile applications.

IoT has become a dominating concept in the industrial arena, and slowly making waves in the consumer segment as well. Although many customers are still not aware of how they are consuming this technology.

It is because the IoT concept is vast, and involves a multitude of technology components, independent of others to become one whole technology. For instance, sensors, Smartphones, and the Internet all have a unique role in the technology domain but are combined to deliver insightful information to understand consumers’ behaviour.

For the internet of things to become operational, these tech components need to be integrated to generate value.

3 Key Components of IoT are:

The three main components for building an IoT application are:

IoT application development companies play a crucial role here. These companies integrate all the technology elements strategically to develop an architecture that allows information to flow from one end to the other end smoothly.

IoT is extraordinary. The technology concept lying on the evolution of home, mobile, and embedded applications spark the next industrial revolution.

Internet of Things opens up a world of powerful, real-time business information, that industries can use to discover business threats and strengths.

It put the ball’s in the decision-makers court; they have the information, it is now their responsibility how critically they strategize.

There are many IoT platforms, however, these 3 platforms are widely recognized for their efficiency.

The 5-tier of IoT Core Architecture is: 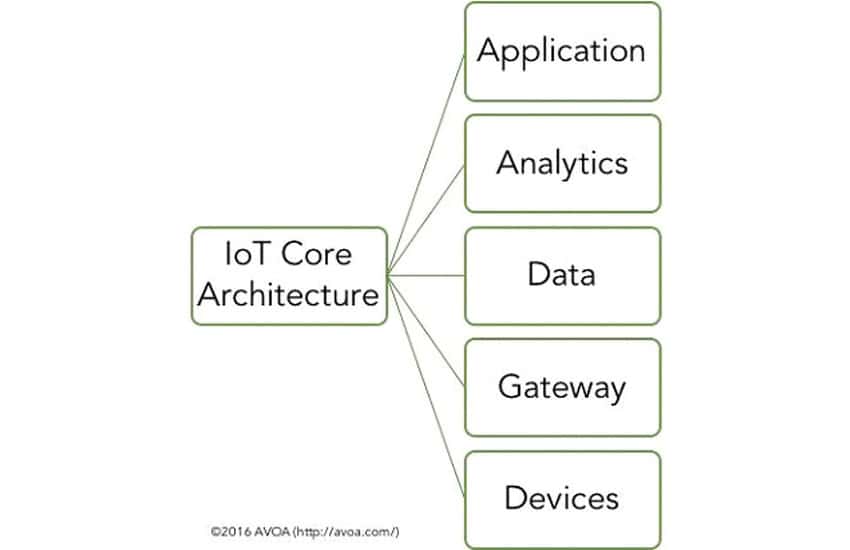 Building A Robust Security Mechanism for the Internet of Things Application

A quote by Robert S. Mueller, III, Director FBI “There are only two types of companies: Those that have been hacked and those that will be hacked” well explain the need of creating a robust security mechanism.

IoT application development companies have to remain cautious while creating a security mechanism that must cover all the aspects of security, such as device security, application security, and network security.

Since IoT apps involve a lot of public use, creating cyber security awareness among the public is also important.

Besides, Machine Learning can be effectively used to create the best security practices which include computation, digital forgetting, communication, and privacy settings.

Artificial Programming Interface provides a gateway to access the data and keeping it separate helps in making the necessary changes according to future trends.

For example, desktop interfaces were popular sometime back but now has been replaced by mobile interfaces.

Technologists are still on the way to make the Internet of Things more viable and economically feasible for the customers. So, there is a huge scope for IoT to improve and for businesses to adopt new improvements, they must create possibilities for scalability.

IoT app development is gaining huge popularity among startups and enterprises alike. It is because the technology has the capability to provide reliable and accurate data in real-time that can generate insight and strengthen decision-making.

Industries such as healthcare, transportation, and manufacturing are the potential avenues of IoT applications.

It is up to the businesses to find a reliable IoT application development company that can understand their business requirements and based on that develop an IoT application.