The recent surge in the demand of Kotlin programmers can be evident in the fact that some leading apps have migrated from Java to Kotlin.

Top companies such as Uber, Pinterest, Evernote, and Square have shown faith in Kotlin programming language. Even developers and Android app development companies are loving Kotlin for its high compatibility with Java and Objective C and excellent tooling support.

And since both Android and Kotlin are backed by Google, the combination perfectly favors Android App Development process.

According to Realm Report, Kotlin is being increasingly adopted by the developers as a prominent Android programming language. 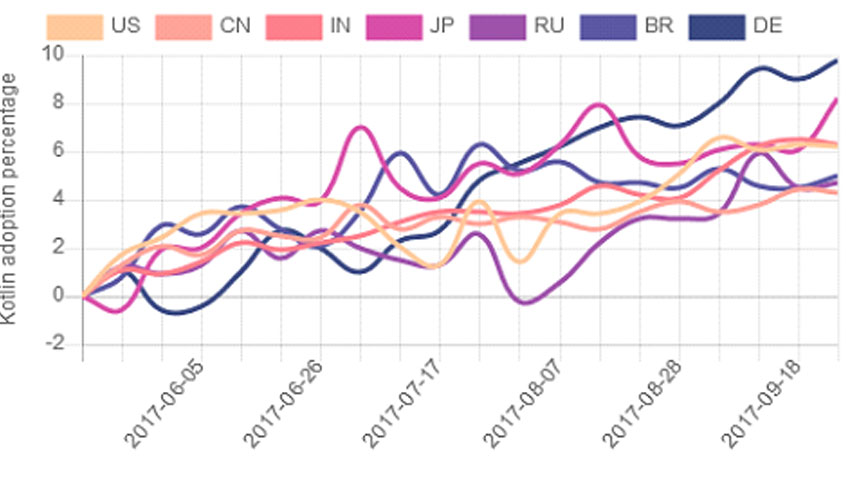 There are many other reasons to rely on Kotlin for Android App Development. I have listed the 5 of them.

It is an imperative necessity that mobile app development companies have good Kotlin Programmers. The programming language is officially supported by Google to write Android apps, which is reason enough to switch to Kotlin for any kind of Android app development.

A list of reasons and more detailed information on choosing Kotlin for Android Application Development is as follows:

Android Studio is based on IntelliJ IDEA, a platform developed by JetBrains. The company introduced the language in 2011, and after 5 years in 2016, Kotlin reached the status of 1.0.

The following year, in 2017, Google announced support for Kotlin as a first-class programming language for Android. The same year in October, it launched Android 3.0 that provides full support to Kotlin.

Now, Kotlin has significantly reduced the amount of boilerplate code required to be written and successfully overcame the Java language for Android platform.

It took Kotlin almost 5 years for the final release of version 1.0. First, the alpha version came out and then the beta version was released. And before its public release, this statically typed programming language was already used by app development companies in crucial projects.

It is fully compatible with Java and interoperable with existing Android language, and its IDE plugins operate smoothly.

Multiplatform native development is the Kotlin’s biggest strength. It runs on JVM (Java Virtual Machine) and since a lot of devices run on it, sharing code between platforms is possible.

Kotlin has the full support of JVM, JavaScript, Android, Linux, Mac, Windows, and many other embedded systems such as STM32.

It brings along the incredible benefit of reusable code to save the time and effort. It doesn’t limit the developers to the common subset of APIs. It allows access to platform APIs through expect/actual mechanism.

Developers can create an iOS app with XCode, use the shared Kotlin library form the iOS app, and then use Kotlin from Swift.

4. Kotlin is Easier and Safer than Java

Java is so vast, widely spread that Kotlin vs. Java comparison is much a waste of time.

But if we compare Java and Kotlin from the perspective of Android app development, it would be not wrong to say that this new language for Android has an edge over Java.

Although, most of the professional Java developers will find that coding process for making classes is almost same for Kotlin. Besides, both the languages share a number of syntaxes.

We can say Kotlin has been developed as an improvement of Java, especially with Android application development. For example, many Android developers find NullPointerExceptions extremely frustrating.

When it comes to Kotlin, Android developers are powered by null-safety feature. Variable in Kotlin code cannot hold a null value unless marked “nullable”.

5. Kotlin is Easy to Learn

Even if an experienced Java developer is beginning to learn Kotlin, right from “What is Kotlin”, still the developer is not going to take much time to become a Kotlin expert. Such easy is this programming language.

The company, JetBrains, has carefully ensured that developers transitioning from Java to Kotlin do not find the process complex, which ultimately increases the complexity of the app development process.

They have kept the language simple, maintaining a close resemblance to Java programming language.

Kotlin for Android developers is full of advantages. Many companies are adopting the language and so there is a good chance of increased demand of Kotlin developers in near future.

It is time of the Java developers to make an attempt to learn Kotlin and embrace new opportunities in Android mobile application development, while also boost their learning curve.