In the technological corners, it is always amusing to find out how quickly a newly coined term becomes a buzzword. And in no time, it passes through different stages of development and a handy product or service is made available for the consumers.

The easiest example in this context is eCommerce websites. Amazon.com was the first eCommerce website launched in 1994 and within 10-15 years, almost all large and medium scale enterprises started selling their products over the Internet. So is in the case of Smartphones. First Smartphone that was marketed to the consumers was also launched in 1994 by BellSouth, and now it has become a modern-day lifeline.

From the consumers’ perspective, if the product meets the convenience, cost, and social factors, it quickly gets adopted on large scale. Here, two critical factors i.e. security and privacy are often ignored at the beginning by consumers and sometimes willingly by tech-leaders, mainly because of lack of effective solution, but gradually before these become a real threat, a shield, may not be strong enough, is developed to keep the technology functional.

One such term, IOT (Internet of Things) was first coined by Kevin Ashton in 1999, but interestingly, it has never became a buzzword, rather it silently revolutionized the industrial sector and gradually paving its way in the consumer market.

Even, Accenture’s latest Industrial Internet of Things trend study confirms that 60% of the companies are already engaged in IoT projects, more than 30% are at an early stage of deployment though. And 69% of these companies’ IoT intitivaties are focused on reducing operational cost.

The growing advancement in sensor technology with respect to range, sensitivity, and resolution, and the network in terms of speed and coverage led to this revolution. The “connected” can help businesses generate insight and provide valued services to their customers, at a reduced operational cost.

Despite the availability of resources and advancements in key IOT components: Sensors and Networks, many companies have not been able to make substantial benefit out of their IoT project.

According to a data released by Cisco, 74% of surveyed organizations have failed with their IoT initiatives. This is mainly because there are several human factors involved in IoT implementation, beyond the functional elements of sensors and networks.

An effective collaboration and integration among all the components of IoT, along with creating a culture of technology within the organization is required to succeed. 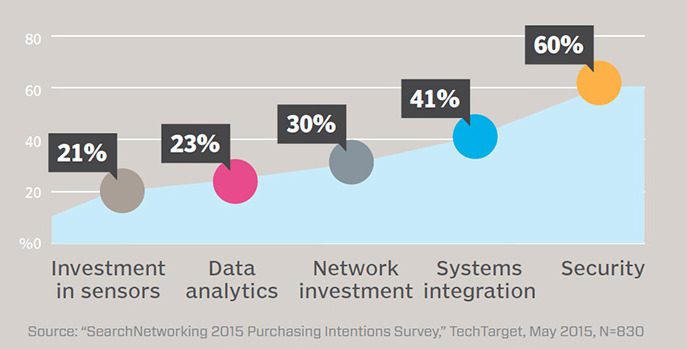 Where most of the companies are often prepared to handle Sensors and Data Analytics, they fail to bring the same level of expertise into Network Investment, System Integration, and Security.

Besides, on the occasion of IoT World Forum 2017, Cisco released a survey that highlights a perception gap between the IT executives and business executives.

35% of surveyed IT executives percieved their IoT project as successful, but only 15% of business executives believe that the initiative was a success.

Capturing invaluable data that lead to false insight could also be the reason many business executives consider their IoT projects unsuccessful.

A list of 10 common challenges faced by enterprises that cause quality issues, leading to the project failure, including budget overruns and long completion times.

Sensors and Networking are the integral components of IoT. But not every machine is equipped with advanced sensors and networking capabilities to effectively communicate and share data. Besides, sensors of different power consumption capabilities and security standards inbuilt in legacy machines may not be capable to provide the same results.

A quick workaround could be to add external sensors, but this is also challenging because determining which function and which part will communicate and share data with the network is complex.

2. Identification and Authentication of Technologies

According to a report, there are around 20 billion connected devices at present, and to connect all the devices involves a lot of security risks and not just complexity. Bringing along a large number of connected devices on one platform needs formalization and system architecture that can identify and authenticate those devices.

For the successful implementation of IoT application, enterprises need to integrate various IoT connected products with right IoT platforms. Lack of proper integration could lead to abnormalities in functions and efficiency to deliver value to the customers.

Research vice president at Gartner, Benoit Lheureux, says “Through 2018, half the cost of implementing IoT solutions will be spent integrating various IoT components with each other and back-end systems. It is vital to understand integration is a crucial IoT competency.”

The major challenge here is too many IoT endpoints and asserts that need to be connected to aggregate the sensor data and transmit it to an IoT platform. Only with deep integration, companies can mine the huge data through Big Data technique to generate insight and to predict the outcomes.

It is the part of networking challenges, as the Internet is still not available everywhere at the same speed. A global mobile satellite company Inmarsat revealed that 24% finds connectivity issue as the one of the biggest challenges in IoT deployment.

Specifically, Logistics and Oil & Gas companies engaged in remote operations require robust communication networks to collect data in tough conditions and transmit back to the centre for analysis.

The quality of signals collected by the sensors and to transmit over to the Networks largely depend upon the routers, LAN, MAN, and WAN.

These networks have to be well-connected through different technologies to facilitate quick and quality communication. But the number of connected devices is growing at a much higher rate than the network coverage, which creates monitoring and tracking problems.

Growing connected devices will increase the challenges of handling unstructured data on the parameters of volume, velocity, and variety. However, the real challenge for the organizations is to determine which data is valuable, as only quality data is actionable data.

With the launch of Big Data frameworks such as Hadoop and Cassandra, the problem and complexity of handling unstructured data has somewhat reduced, but the Big Data in itself is so massive that combining it with IoT possess a great challenge. Besides, there are no standard guidelines for retention and use of data as well as metadata.

The purpose of capturing data is to transform the information collected from various sources in a standard format that can be analyzed and automated.

According to Hubspot report, sponsored by ParStream, out of 86% of business stakeholders who claim that data is integral to their IoT project, only 8% are able to capture and analyze IoT data in a consistent manner. 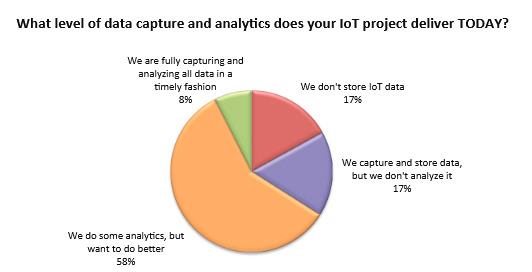 As IoT is mainly about dependence on sensors for signals and networks for the distribution, chances are that due to certain anomalies in runtime, such as a shutdown of power, incorrect data may get recorded.

At this stage, we are at the very purpose of IoT i.e. translating data into meaningful information. A flaw in data or data model could lead to false positives and false negatives. We have to understand the data in itself is not an insight, rather right questions have to be asked from the precise data to gain the insight.

Based on this report by Hubspot, it is apparent that 44% of IoT stakeholders face difficulty in capturing data and 30% confirms that their analytics capabilities are not strong and flexible.

Legacy systems such as traditional analytics software where not all data can be loaded at a time can limit the capabilities to manage real-time data. Here’s the list of challenges that deter intelligent analytics:

Even top companies like Apple, known for big security claims, and visionaries like Elon Musk have not been spared by hackers. Recent cases of ransomware attacks have also challenged the confidence of corporate.

A latest research claims that by 2020, 25% of cyber attacks will target IoT devices.

When it comes to cyber security, lapses could be from both company and consumer side, so it is essential for each party to take necessary measures to improve security.

A study revealed that 54% IoT device owners do not use any third party security tool and 35% out of these do not even change default password on their devices.

Here, it should be a collaborative effort between companies and customers to plan and implement collaborative data security policies for successful IoT implementation.

Many people are not aware of IoT, but they understand the dependence on Smart Apps like news apps, stocks applications, entertainment applications. It is not actually important for the consumers to how things work technically, but lack of basic awareness can create a fear of security and cost, which could lead to the slow adoption of technology.

According to a survey of 3,000 U.S. and Canadian consumers conducted by Cisco, 53% consumers would not prefer to get their data collected, irrespective of the device. This shows the fear among users to share their data, which can act as a deterrent to the IoT

According to Forbes Insights Survey, 29% executives feel major challenge in building IoT capabilities is the quality of IoT technology.

This data reveals the struggle of IoT application development companies in bringing the value for their consumers. So, before plunging into the development of IoT applications, an enterprise must clearly define what value they are going to deliver through what capabilities. And how their solution will enhance the efficiency and productivity, while also generating customer-satisfaction.

As the IoT is all about “connected things”, the IoT projects also require a high level of assistance throughout the way. Around 50% of companies with IoT intitivaties are strongly involved with IT service providers or consulting firms, relying on them to help across solution delivery and provide business advice.

Connect with an IoT Development Company that thinks engineering beyond design and work on integrating all the components of IoT in a manner that is focused on connectivity, gaining insight, and maintaining accuracy at all the stages.

Nevertheless, keep a scope for enhancements of product capabilities to successfully improve the functional efficiency of the product or service based on the latest technology.

Finoit Technologies is a renowned mobile app development company providing custom software development services and IOT application development services. We have developed over 450 mobile apps, and have assisted many solopreneurs in their journey of startups by functioning as a tech partner and rolling out their product ideas. For questions/queries, you may write to us at [email protected]